Obama’s Executive Orders: Too Many?

I think it’s fine to critique the president, but we need to make sure that our perception of their performance matches up with the real data.  Obama’s executive orders have been issued at the lowest rate since Grover Cleveland (1893 – 1897). It’s negligent to allow a false concept to endure and proliferate, as many of Obama’s critics have done, saying this level of use of a standard presidential power is a new and radical cause for concern. American legal scholars and the Supreme Court have considered it constitutional since the nation’s inception. We can compare the averages of recent presidents: Bush Jr. – 36, Clinton – 46, Bush Sr. – 42, Reagan – 48, Carter – 80, Ford – 69, Nixon – 62, Johnson – 63, Kennedy – 75, Eisenhower – 61. As of September 15th, 2016, Obama had put 252 executive orders into effect.  That’s the smallest total for a two term president since the late 1800s.  To call him an imperial president, as many Republicans do, is likely a grand overstatement if not an outright act of fearmongering, deception and demagoguery.  I’m not under the illusion that the Democrats don’t use manipulative tactics as well.  But, we must try to analyze the specific cases of alleged misrepresentation of facts, along with the larger themes of behavior.  The focus ought to be on the content and impact of each order by each president. 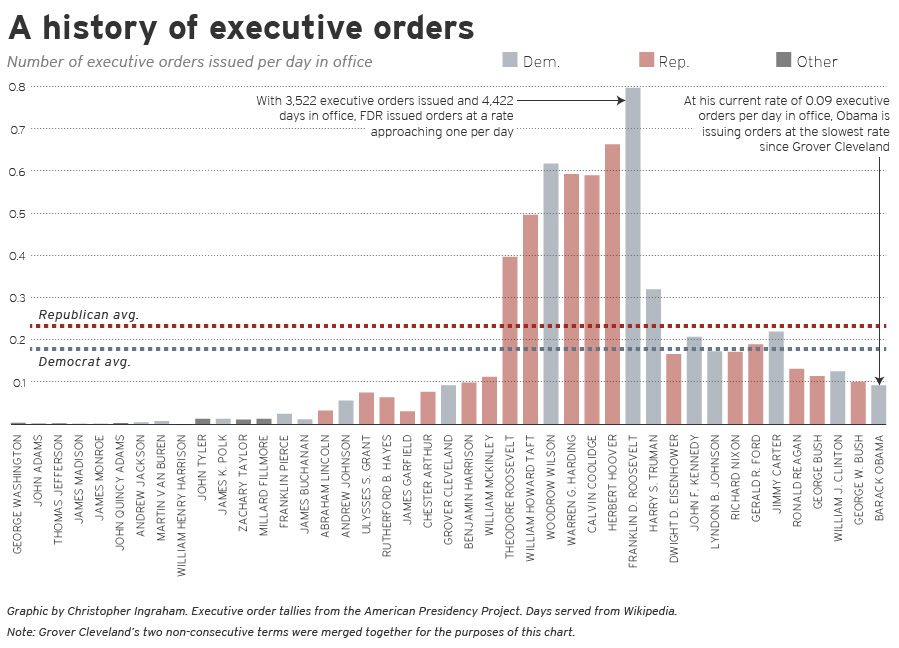 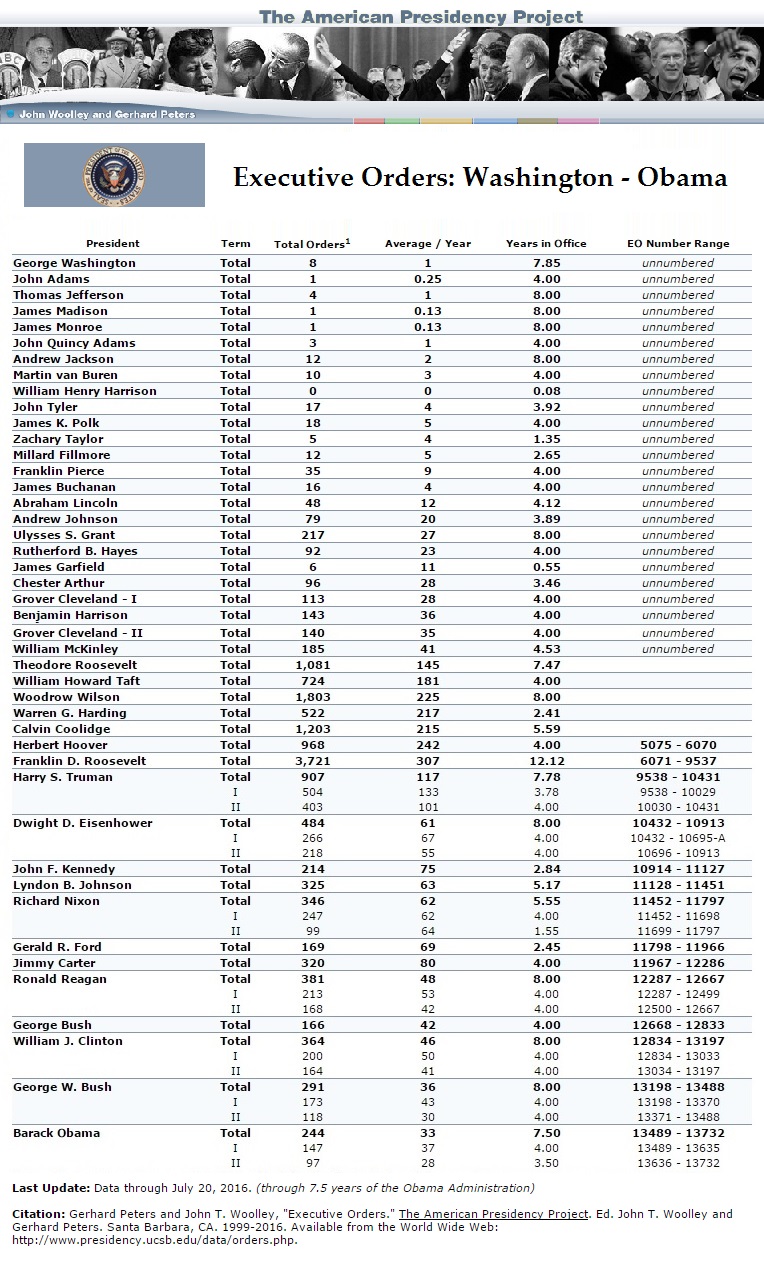 When Obama leaves office in January 2017, the total will likely be close to about 30 under Bush Jr.’s number.  A full and up-to-date list and description of each executive order is available directly from the White House and several other government agencies.  Here are Obama’s statistics by year:  2009 – 39, 2010 – 37, 2011 – 34, 2012 – 38, 2013 – 21, 2014 – 31, 2015 – 29, 2016 – 23 (through September 15th).
For those individuals who question the constitutionality of executive orders, I’ve included these references:
“The president can issue executive orders, which have the force of law but do not have to be approved by congress.” – Cornell Law School
“Executive orders and proclamations are directives or actions by the President. When they are founded on the authority of the President derived from the Constitution or statute, they may have the force and effect of law.” – John Contrubis, “Executive Orders and Proclamations”, March 1999, CRS Report for Congress
“The president’s power to issue executive orders comes from Congress and the U.S. Constitution.” – Encyclopedia.com
“Executive orders also may be authorized by the president’s independent constitutional authority.” – The Free Dictionary – Legal Dictionary
The kind of hyperbolic language that compares Obama to emperors and kings is prevalent at Fox News and much of right-wing America. Their criticisms may be somewhat based on facts about the particular content of his executive orders, but the way these overstatements affect the general public is very detrimental.  Let’s discuss the details of various legislative policies and not exaggerate.  It doesn’t help us to better understand oppression anywhere near as much as it scares citizens tremendously and distorts reality. Crying wolf so consistently results in disabling the alarm bell best used to rally Americans against actual tyranny. Regular calls by many Republicans to think of Obama’s behavior and values as equal to Mao or Stalin are intended to be shocking so that their constituents will take political action, but these messages are illogical and seriously immature.  Is Obama really deserving of a Hitler mustache like many Tea Party protesters have given him on signs?

On the Tea Party’s official site, Obama was outright named as “America’s Hitler” in a caption above an image of Nazis shooting a person in the head. This message was associated with grave warnings of a coming holocaust and the film Schindler’s List. At some point after December 2016, this picture and wording was removed from the web.
The need to call this analysis ludicrous, embarrassingly inaccurate and wildly irresponsible should be obvious, but for a large portion of America it appears reasonable.
We’ve been told constantly that if the country takes just a few steps to the left of today’s far right version of American conservatism, then internment camps and mass murders will necessarily follow. Out of the approximately 200 countries today and their various forms since the lifetimes of Marx or Hitler, how many were significantly comparable to a murderous and excessively controlling regime? This vision of immanent oppression comes out of groups like the Tea Party as a reckless knee-jerk reaction to anything less conservative than what they believe. They present a false choice: it’s either their extreme viewpoint or else it must be evil and destined to take away all that Americans know and love. Why won’t they discuss these things in gradations instead of such polarized and grandiose models? To follow their logic, the elements and degrees of emphasis on governmental social programs (used along with capitalism) found in virtually all other advanced Western nations, which are and have been most often considerably more leftward than that of modern Democrats, must inevitably and inherently exhibit horrific and inhumane qualities like what was pervasive in the governments of Hitler, Mao and Stalin. Really? How many people did these more “socialistic” (not communist or Nazi) countries like Australia, France, Canada and Norway imprison or kill in the 1920s or 1970s or 2000s?
If Obama actually was a tyrant on the scale of those notorious totalitarian dictators and mass murderers, then an immediate overthrow of his “reign” would be morally required – including war if normative politics could not accomplish this.  As the American right-wing labels him as this kind of leader, they are directly asserting (whether they realize or admit it or not) that an insanely evil person leads our country and thus at some point blood may have to be shed to remove him.  When “fringe” people follow-up in a logical extension of this viewpoint by committing non-violent or violent crimes against government institutions or publicly funded organizations, the Republicans deny that their aggressive and frightening style of speech had anything to do with it.
These fearful proclamations have been offered in the public square for many years.  Crazy political ideas of that kind have spread and intensified to the point where Republican presidential candidates such as Ben Carson could say without a pushback from the conscience of their base things like that moderate gun control in America will necessarily lead to something similar to Nazi Germany and “Obamacare is the worst thing since slavery.”
According to the vast majority of political scientists and analysts in the media, Obama’s style of government has typically been considerably more moderate than most countries in the world.  We can examine forms of health care as an example, where a single payer health system is widely established.  This stands in distinction from the type of individual mandate structure found in Obamacare, similar in multiple ways to solutions advocated by Republicans between the late 1980s and mid 2000s.  Influential and conservative politicians like Ronald Reagan proposed solutions to health care challenges that resemble Obamacare on several points.  Even Fox News has overtly acknowledged the commonalities between these various plans and the two decade long process that began with a Heritage Foundation proposal, evolved through many individual mandate legislation agendas put forth by numerous respected Republican leaders and resulted in the Affordable Healthcare Act.  Before this era, Richard Nixon’s 1974 recommendation laid out a system that one prominent economist has described as one in which “all but the smallest employers would provide insurance to their workers or pay a penalty, an expanded Medicaid-type program would insure the poor, and subsidies would be provided to low-income individuals and small employers.”  All of this serves to further illustrate how far away from moderate Republicanism the party has increasingly moved during the past 30 years or more.  The University of Michigan has studied the differences between Nixon’s health care proposal and Obama’s Affordable Care Act and found the former to be more liberal. 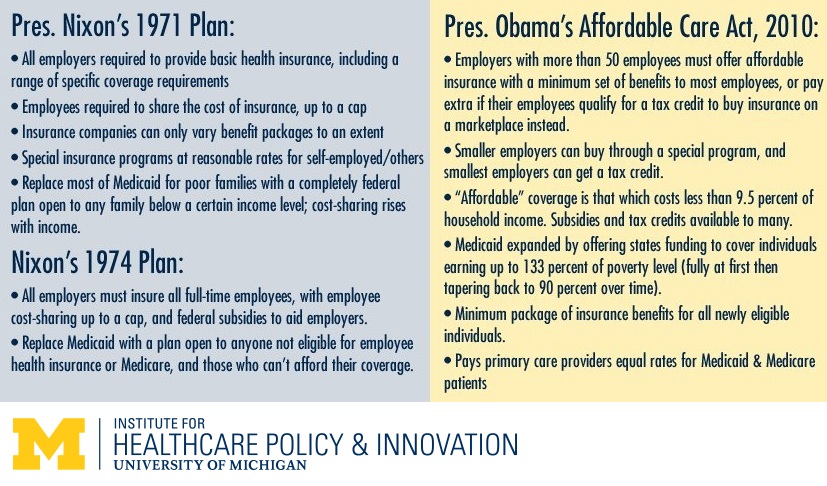 We must significantly improve our toxic political environment, calm down, choose civility instead of hate and speak rationally about the problems and opportunities that face us.
Advertisement